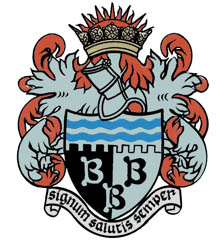 A coined phrase for alliteration purposes and strictly speaking considered to be out of context.

Always the bearer or bringer of greetings and salutations and good health; the sign of safety or good health always.

The Town Council was awarded this armorial bearing by the Monarch and no other person or body can use the arms.